At work I maintain classrooms outfitted with equipment for video conferencing for mainly distance education. These rooms can be quite complex with multiple cameras, video monitors, and audio and video routing that would make you dizzy.

One of the challenges we face is maintaining a free flowing educational environment for students and faculty at both the near side and the far side allowing both sides to feel as if they were in the same room together. Usually this means we have a technician in the room who is paying close attention and switches the cameras around so when a student asks a question, the far side sees this student and vise-versa and then quickly switch back to the instructor in the front of the room. When you have a room of 50 students this can be quite a challenge to achieve a seamless experience.

I wanted to make this easy. One of the nice things was that we still had push to talk microphones in our largest room (we've been slowly moving towards hanging microphones which presents challenges for this solution). In Biamp Tesira you can enable logic outputs for the Auto Mixer block which allows you to use those gate functions to control other things and in this case the Polycom VSX 8000 unit. 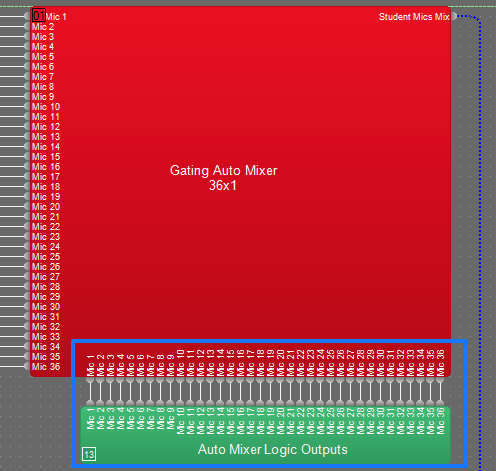 As these logic outputs follow the Auto Mixer gates, each output will go high when the specific microphone is gated on.
Knowing where each of the 36 microphones exist in the room I was able to create 6 preset positions on the Polycom- Front Right, Middle Right, Rear Right, Front Left, Middle Left, and Rear Left.
Using a few logic blocks I sorted the microphones into 6 groups for each preset. Adding a logic delay allows the microphones to be gated on for longer than a specified amount of time before it pulses the command, this ensures the preset won't be recalled unless a student is actually talking vs. just an open microphone. Finally the logic signal reaches a Network Command String block which sends the "Preset Near Go" command to the Polycom unit over IP. 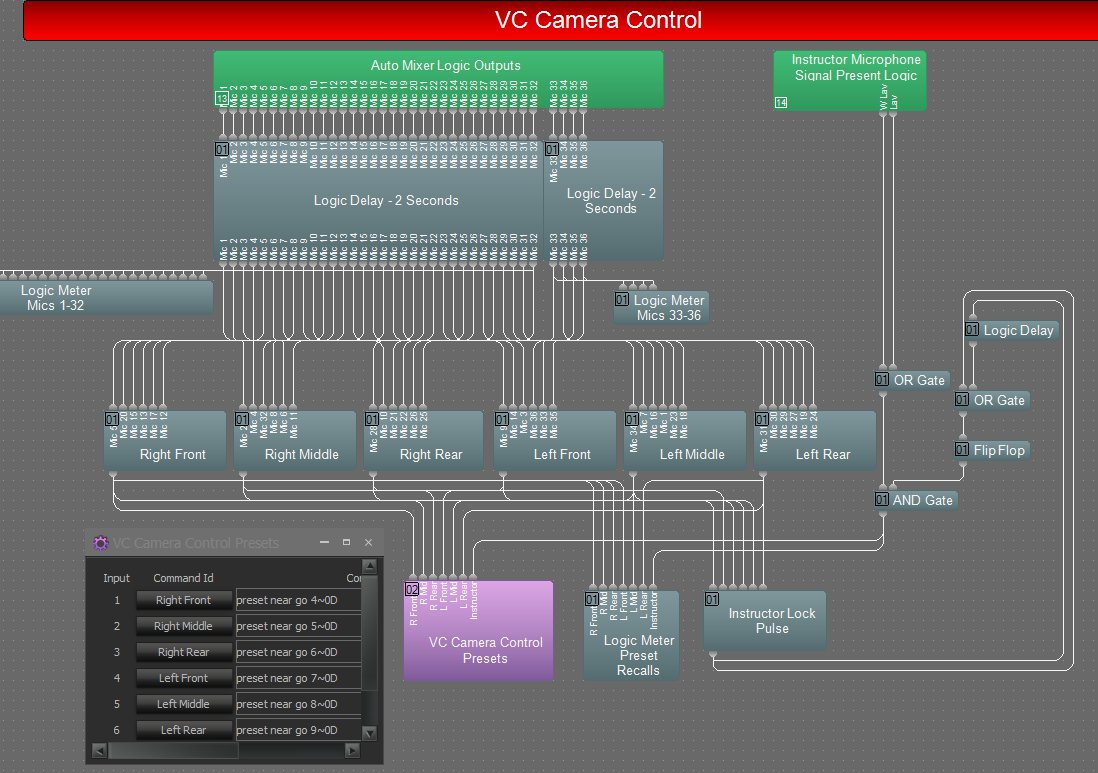 The flow is that when a student microphone is gated on by the auto mixer for longer than 2 seconds, a logic pulse will trigger the recall of the student camera to a preset based on which microphone was being used. The camera moves to a general location of the group of 6 microphones to where the technician can further move the camera if desired.

This takes a lot of the guess work out from the technician to figuring out which student is talking, where the student is sitting, and then moving the camera appropriately. Often times the student was finished with their question or response before the technician could move the camera.
The next step is to use similar logic flow to automatically switch the camera back to the instructor however this presents some additional challenges such as:

Some of the answers to these questions are actually in my screenshot from Tesira, however I haven't tested those yet.